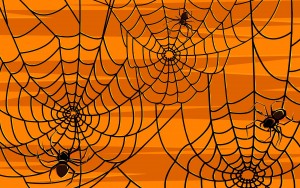 OK, so how to get rid of spiders

Most sources will tell you to start by sealing off all the cracks in basement walls and window casings. Fine, go ahead. It might be, though, that those cracks are where the spiders might hang out and thus be invisible to you, which is the same as getting rid of them, right? In any event, whether or not you can do this depends on where you live. For most of my life before moving to the Midwest, I lived in houses that were between 100 and 200 years old. Forget about sealing cracks in places like that. But if you live in a modern home it might be possible. So get out the caulk and get sealing.

Insecticides don’t work particularly well on spiders for two reasons: 1) they are not insects; and 2) many insecticides work on the principle that the insect drags its body across the surfaces you’ve wet down with the juice. Spiders keep their bodies up off the surfaces they are crawling on. But, getting rid of the insects will reduce your spider population because you are starving them out. Personally, I don’t like using insecticides. They are icky and smell bad and it amounts to spreading a poison around in your living space. So go spray some around if you want, but wait a week or two to invite me over, please!

A common piece of advice is to make sure your house has very little stuff, like boxes or storage containers or furniture or drapes etc. where spiders can hide behind. This advice amounts to telling you to get rid of all your stuff. So go ahead and do that and you’ll have fewer spiders. I don’t think you are doing to do that, though.

OK, ok, so all these methods and other methods you see on the internet don’t work, or have undesirable side effects. So what is the point? Is there nothing you can do? Of course there is, and I told you a major clue at the beginning of this blog post!

So, how do I get rid of the damn spiders, then, smartypants?

You can’t get rid of them but you can reduce their numbers. Here’s how: Get a vacuum cleaner and go all around your house in the spring, after the insects and spiders have started to become active (which depends on where you live) and vacuum up all those nooks and crannies using the wand attachment. Make sue you have a good vacuum and the bag is empty and all that so you have good suction. Vacuum the ceiling of your basement, all the corners, around the molding (don’t forget over the door frames) and behind furniture, under the couch cushions (including in the deeper often missed recess of the couches and overstuffed furniture). Turn the furniture over … all of it … and vacuum underneath. Don’t just reach under your dining room table: Get on your back like you were changing its oil and vacuum out every little nook and cranny up under there.

Obsessively, compulsively, suck up every bit of dust everywhere in your house, and that will get rid of 99% of the extant spider, insects, eggs, egg sacks, and even the food may various insects will eat. Well, not really. There are entire categories of insects or other creatures that are too small to see and that can’t really be vacuumed, that that you’ll probably miss, like the mites that live on your cat’s eyebrows. And your eyebrows. Nonetheless, if you give your house a very very thorough vacuuming and cleaning you’ll stop that first generation of spiders form doing well. The remaining spiders, or the ones that sneak into your house later on, will not have the head start they usually have, and as each generation grows and grows in number they will not achieve the large population they would have.

One final piece of advice: Most people do not seem to realize that many biological phenomena occur in cycles spanning several years. Is that oak tree especailly annoying with its acorns this year? Well, they only do that every few years … for a reason … and you may not have noticed this. The mistake many make is to take the worst year and use that as their benchmark. The truth is that if you have a lot of spiders in your house all of the sudden, this does NOT mean that your house has made some sort of transformation from a house in which there are hardly any many spiders to one overrun by them and will thereafter be spider-house. No. Most likely you have experienced a simple natural cycle and if you do nothing, there will be fewer the next year. My advice …. to relax about the spiders but do a major hit on their numbers early in the year using the basic organic and safe technique of vacuuming everything up … will reduce the amplitude of those cycles so low-spider years will seem spider-free and high-spider years will be not as annoying. And it is all about the perception of spiders and not how many spiders there actually are. Because you can’t really get rid of them.

As always if you need someone to get rid of the webs for you just call Exceptional Cleaning @678-887-4306 or visit us on the web www.atlantaexceptionalcleaning.com

Megan Farley is the owner and founder of Exceptional Cleaning. Megan lives in East Cobb.