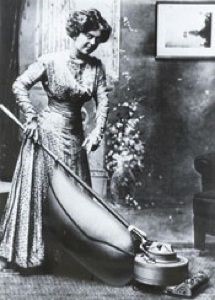 Vacuum cleaners seem like they have been in our world for a significant amount of time. And, they have been. Vacuum cleaners have been known by a variety of different names, but they all have the same goal: to use air as a vacuum to draw dirt and debris from floors or furniture. These devices are also known as hoovers and sweepers.

In 1599, the British began to investigate the idea of using something mechanical to clean the floors. This was due to the ineffective way that rugs were cleaned. They were take outside to be beaten with a carpet beater. They had to hung over something, like a gate or a fence and the beater sent dirt and debris into the air. The people who were tasked with beating the rugs often inhaled the debris and would become very ill. Something needed to be done. Unfortunately, the Brits were not successful.

The first patent for anything that closely resembled a modern vacuum cleaner is the “sweeping machine” invented by Ives McGaffey in Chicago. His patent was issued on June 8, 1869, almost 300 years after the British began looking for an alternative to the carpet beater. The sweeping machine did clean rugs, but it was not with a motor that powered air. The sweeping machine was known as the Whirlwind and it picked up dirt using a hand-pump that involved wood and canvas.

About 30 years later, homeowners in St. Louis, Missouri could use a community vacuum system that arrived on a horse and buggy. For $4, John Thurman would bring his gasoline-powered vacuum to your home in 1899 and clean your carpets. This vacuum is historically considered to the be the first vacuum that ran by a motor. Thurman received a patent for his horse and buggy vacuum on October 3, 1899.

Two years later, Hubert Cecil Booth, from Great Britain earned a patent for his motorized vacuum cleaner. His machine was also driven by a horse, but it used petroleum to run the vacuum. His patent was awarded on August 30, 1901. To clean carpets, Booth’s machine used long hoses that went through windows and doors. He first used it to clean the floors of a restaurant and it actually worked. This machine began the age of the vacuum cleaner.

Soon, American inventors took up the same cause that Booth did. They used machines that would clean through suction. An inventor named Corinne Dufour used a wet sponge as the device that captures dirt and dust and David Kelley devised a machine that drew dust and dirt into the basement levels of a home. Kelley’s machine had pipes that were interconnected to clean each room and bring the results into the cellar. Unfortunately, these machines did not work as well as they could and they were extremely loud. Many were unwieldy and could not be counted on to be available to clean when needed. A smaller unit needed to be developed.

It didn’t take long. Just a few years later in 1907, the very first handheld vacuum was invented by a man named James Spangler who was from Canton, Ohio. He was a janitor who suffered from chronic coughing that he believed stemmed from the dirt carpets he swept. His makeshift vacuum was constructed with an unusual amalgamation of pieces that included a pillowcase, a fan motor, a soap box, and a broom handle. Dust was collected by the pillowcase that was eventually replaced by a cloth filter bag. Spangler added cleaning attachments, then was awarded a patent in 1908.

The revolution was on its way. Spangler saw success with his vacuum, so he created his own company called the Electric Suction Sweeper Company. Spangler’s cousin, who happened to be married to William Hoover, bought one of Spangler’s earliest vacuum models. While most people alive today would not recognize Spangler’s name in connection to vacuums, they certainly would recognize the name of Hoover. Mr. Hoover then created his own company, Hoover Company and he ended up buying the patents and designs from Spanger. In fact, Spangler ended up working for Hoover.

To keep Spangler’s ideas working, Hoover put money into the vacuum cleaners. Spangler’s original product looked very different as the redesign bearing Hoover’s name looked more like an unusual cake box with a bagpipe on top. Despite the visual oddity, the vacuum cleaned well. This lead to the company developing the first upright vacuum that included a bag to collect debris. This upright vacuum was not a quick seller, which is a strange thing in hindsight. So, to draw customers, Hoover offered a 10-day free trial. This drew customers and after they lived with a vacuum for 10 days, word spread. Nearly everyone purchased a Hoover and stopped using the old-fashioned carpet beaters. We all know that the beater was overtaken by the vacuum.

In 1920, a company in Toledo, Ohio developed a disposable vacuum cleaner bag that made vacuuming even more efficient and clean. Air-way Sanitizor Company. This bag was a first and did change the way that vacuums have been used. Up until the advent of the Dyson Cyclon, nearly every vacuum cleaner relied on disposable bags to contain the dirt.

For a maid service that has over eight years of history cleaning Atlanta and the Metro Atlanta Area call Exceptional Cleaning @ 678-887-4306 or visit us on the web www.atlantaexceptionalcleaning.com to schedule your cleaning today.

Megan Farley is the owner and founder of Exceptional Cleaning. Megan lives in East Cobb.